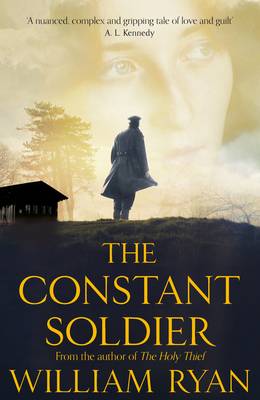 The pain woke him up. He was grateful for it. The train had stopped and somewhere, up above them, the drone of aircraft engines filled the night sky. He could almost remember her smile . . . It must be the morphine . . . He had managed not to think about her for months now.

1944. Paul Brandt, a soldier in the German army, returns wounded and ashamed from the bloody chaos of the Eastern front to find his village home much changed and existing in the dark shadow of an SS rest hut – a luxurious retreat for those who manage the concentration camps, run with the help of a small group of female prisoners who – against all odds – have so far survived the war.

When, by chance, Brandt glimpses one of these prisoners, he realizes that he must find a way to access the hut. For inside is the woman to whom his fate has been tied since their arrest five years before, and now he must do all he can to protect her.

But as the Russian offensive moves ever closer, the days of this rest hut and its SS inhabitants are numbered. And while hope – for Brandt and the female prisoners – grows tantalizingly close, the danger too is now greater than ever.

And, in a forest to the east, a young female Soviet tank driver awaits her orders to advance . . .

This is such an emotive read!

Paul Brandt is a German soldier who has been seriously injured on the Eastern Front. So when he returns back to his village home to live with his father to convalesce he realises everything has changed and finds he is living next door to an SS rest hut where a number of female prisoners are forced to work ‘for the good of the camp.’ But when Brandt glimpses a female prisoner, behind the barbed wired fence, from his past he decides that he must gain access to the hut to help her. But Brandt faces danger from all directions both inside and outside of the camp.

I absolutely loved this novel which was littered with beautiful descriptions and historical facts with the author skillfully weaves into the story without it overpowering the narrative, making it feel both haunting and authentic.

The protagonist, Paul Brandt is an unlikely but lovable hero who loathes himself for the crimes he had to commit in the name of ‘the Fatherland.’ He is one of the many characters who still has a moral compass and wishes to atone for his sins by trying to rescue not only the prisoners but himself as well. I also loved Brandt’s bravery which really stood out for me as he risks his own life to fight for what is right.

This novel is told from the point of view of Brandt, Neumann an SS officer who runs the hut, Polya, a Russian tank engineer, and Agneta, the female prisoner who works in the hut and has a past with Brandt. I loved the different perspectives in this novel which reflected the persecution within Nazi Germany and the devastating affects the Second World War had on everyone.

This novel focuses on the last few months of the Second World War in a small remote village and the toll the war has had on humanity. The author doesn’t focus too much on the concentration camp which features in the novel but whose presence is always there lurking in the shadows. The story does showcase some of the atrocities which happened within this period of history as well as hinting at the darkness within each of the characters.

I did find I had my fist in my mouth for much of the novel which reflected a society torn apart by a fascist regime and a violent five year war and its devastating consequences.

This is an emotional and fascinating insight into a period of history which we know so much but at the same time so little about and is a heart-stopping gripping story of loss, love, resilience, guilt and above all hope – I cannot recommend this book enough!

One response to “Thriller Review: The Constant Soldier by William Ryan”