Today, I’m pleased to be hosting the next stop on the blog tour for Whiteout, written by Ragnar Jonasson, translated by Quentin Bates and published by Orenda Books.

Two days before Christmas, a young woman is found dead beneath the cliffs of the deserted village of Kalfshamarvik. Did she jump, or did something more sinister take place beneath the lighthouse and the abandoned old house on the remote rocky outcrop?

With winter closing in and the snow falling relentlessly, Ari Thor Arason discovers that the victim’s mother and young sister also lost their lives in this same spot, twenty-five years earlier…

This is the last instalment in the Dark Icelandic series which for me is bitter-sweet as I’ve adored each and every one of this books.

This novel again features the lovable hero Ari Thor, who is pulled into investigate with his old-partner Tomas in the very north of the Island. But with Christmas merely days away and the imminent birth of his first child, can Ari discover the truth behind the ‘supposed’ suicides in time?

I loved this novel and thought this final instalment was the author’s best story yet. The novel is broken up into three parts: A Prelude to a Death, Lies and Innocence which I thought was a clever device. I don’t want to give the story away but I really enjoyed the passages with Asta, in A Prelude to a Death, who is later found at the bottom of the cliffs as it really set up a brilliant mystery and immediately captured my attention.

Ari Thor is back in this story (yey!) and this time he brings along his pregnant girlfriend, Kristen with him on a journey to the north as he tries to uncover a killer. It was really good to see more of this relationship, especially since Kirsten is pregnant and their relationship is at the heart of Ari’s life and the series as a whole.

This story is a slow burner, very much your classic golden crime novel which slowly builds in tension and slowly draws you deeper into the story which I thought was reminiscent of classic crime story telling.

Again, the author’s ability to bring such an atmospheric and harsh climate really came to life in this book along with a brilliant mystery. The Icelandic landscape, the author’s beautiful descriptions and brilliant way he draws you into a captivating tale really sets this series apart. If you haven’t read the others yet, I would encourage you to do so – as soon as you can!

Ragnar Jonasson is author of the international bestselling Dark Iceland series. Ragnar was born in Reykjavik, Iceland, where he continues to work as a lawyer. He also teaches copyright law at Reykjavik University and has previously worked on radio and television, including as a TV-news reporter for the Icelandic National Broadcasting Service. Ragnar is a member of the UK Crime Writers’ Association (CWA) and set up its first overseas chapter in Reykjavik. He is also the co-founder of the international crime-writing festival Iceland Noir. From the age of 17, Ragnar translated 14 Agatha Christie novels into Icelandic. He has appeared on festival panels worldwide, and lives in Reykjavik with his wife and young daughters.

Big thanks to Karen Sullivan at Orenda Books, and Anne Cater for my ARC.

You can purchase Whiteout from Amazon here or Waterstones here.

Don’t forget to check out all the other fab stops on this blog tour!

Today I’m pleased to host a stop on the Rupture blog tour by Ragnar Jonasson. Rupture is the fourth novel in the Dark Iceland series published by Orenda Books and translated by Quentin Bates. The action of Rupture follows on from Blackout but before the events of Nightblind.

Now for the blurb:

Two young couples move to the uninhabited, isolated fjord of Hedinsfjörður. Their stay ends abruptly when one of the women meets her death in mysterious circumstances. The case is never solved. Fifty years later an old photograph comes to light, and it becomes clear that the couples may not have been alone on the fjord after all…
In nearby Siglufjörður, young policeman Ari Thór tries to piece together what really happened that fateful night, in a town where no one wants to know, where secrets are a way of life. He’s assisted by Ísrún, a news reporter in Reykjavik, who is investigating an increasingly chilling case of her own. Things take a sinister turn when a child goes missing in broad daylight. With a stalker on the loose, and the town of Siglufjörður in quarantine, the past might just come back to haunt them.

In the quaint town of Siglufjörður, the inhabitants are forced to keep themselves locked behind doors as a deadly strain of a virus hits which has everyone in a panic, and the whole town trapped in a quarantine.With no-one to seemingly ‘police’ Ari Thor is left with a lot of time on his hands. So when someone brings in an old photograph which provokes him to look into an very old case, Ari uncovers more than he bargains for. Running parrallel to this is Isrun, a news reporter who is concealing her own health issues who is forced to unpick a dangerous mystery of her own.

What can I say about this novel without giving anything away?

I loved revisiting Ari Thor and his world, as he struggles to face yet another mystery which seems just out of his grasp, forcing him to rely on his own initiative – which gets him into lots of trouble!

There are a few different point of view characters in this novel each with their own story line which blend seamlessly into one narrative, which I thoroughly enjoyed and just demonstrates the amazing writing skill of this author.

At the end of each chapter the author raises yet more questions which kept me on my toes with its subtle mysteries and mini-cliffhangers – I just couldn’t put this book down!

I have always enjoyed the descriptions in the Dark Iceland series and this one didn’t disappoint! The author showcases yet more of the beautiful but terrifying landscape of Iceland in this novel which built into yet another atmospheric but chilling read.

I thought this was another brilliant novel from Ragnar which has all the ingredients of a fantastic golden age mystery novel with hard-hitting themes and a flawless writing style which lulled me into a false sense of security.

If you haven’t read any of the Dark Iceland series it is a must! And Rupture is definitely my favourite novel of the series so far.

With thanks to Karen Sullivan at Orenda Books for my copy of Rupture.

To buy this book from Amazon just click here.

Icelandic crime writer Ragnar Jónasson was born in Reykjavík, and currently works as a lawyer, while teaching copyright law at the Reykjavík University Law School. In the past, he’s worked in TV and radio, including as a news reporter for the Icelandic National Broadcasting Service. Before embarking on a writing career, Ragnar translated fourteen Agatha Christie novels into Icelandic, and has had several short stories published in German, English and Icelandic literary magazines. Ragnar set up the first overseas chapter of the CWA (Crime Writers’ Association) in Reykjavík, and is co-founder of the international crime-writing festival Iceland Noir. Ragnar’s debut thriller Snowblind became an almost instant bestseller when it was published in June 2015, with Nightblind (winner of the Dead Good Reads Most Captivating Crime in Translation Award) and then Blackout following soon after. To date, Ragnar Jónasson has written five novels in the Dark Iceland series, which has been optioned for TV by On the Corner, and had rights sold in fourteen countries. He lives in Reykjavík with his wife and two daughters.

Don’t forget to check out all the other stops on the tour as well! 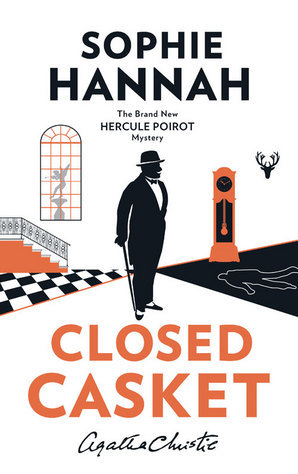 Blurb: Hercule Poirot returns in another brilliant murder mystery that can only be solved by the eponymous Belgian detective and his ‘little grey cells’.

Lady Athelinda Playford has planned a house party at her mansion in Clonakilty, County Cork, but it is no ordinary gathering. As guests arrive, Lady Playford summons her lawyer to make an urgent change to her will – one she intends to announce at dinner that night. She has decided to cut off her two children without a penny and leave her fortune to someone who has only weeks to live . . .

Among Lady Playford’s guests are two men she has never met – the famous Belgian detective, Hercule Poirot, and Inspector Edward Catchpool of Scotland Yard. Neither knows why he has been invited . . . until Poirot starts to wonder if Lady Playford expects a murderer to strike. But why does she seem so determined to provoke, in the presence of a possible killer?

When the crime is committed in spite of Poirot’s best efforts to stop it, and the victim is not who he expected it to be, will he be able to find the culprit and solve the mystery?

Lady Athelinda Playford invites Inspector Edward Catchpool and Hercule Poirot to her remote mansion in County Cork along with a number of other guests including her children. When she announces at dinner that she has changed her will cutting off her two children and leaving it to her personal who only has weeks to live, she sets off a chain of events which will end in murder. But can Hercule Poirot and Inspector Catchpool put their differences aside long enough to uncover the true culprit and solve the mystery?

I loved this book from the outset which I read in a day and a half.This story has everything a golden age mystery would have, making this feel authentic.

This novel does have a low body count which I found refreshing as it allowed the focus to be on the ‘closed casket’ mystery. This is a novel which looks at the minds and actions of each character with Hercule Poirot slowly unravelling the motivations behind each one which I loved. This is a brilliant golden age mystery which takes the reader on a journey along with Inspector Catchpool and Hercule Poirot.

Closed Casket is a compelling novel full of twists, surprises with a classic murder mystery at its centre. I would recommend for all crime fans!

With thanks to HarperCollins for an advanced review copy.